The Darkness Gazes Back 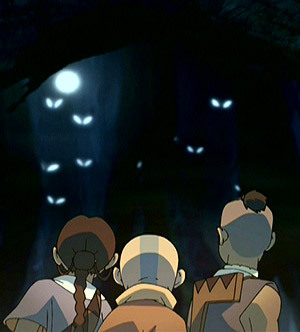 A common Horror Trope. A character is surrounded in darkness, aware that there's something lurking just in the shadows. They stare inquisitively into the abyss... and then a pair of eyes appears and returns the favor.

Usually, this is used for Rule of Scary, but there's many other uses. For example, a comedic effect could be that the entity shrouded in shadow could be invisible except for their eyes.

By the Lights of Their Eyes is a Sister Trope. A typical trait of Things That Go "Bump" in the Night. Compare Glowing Eyes of Doom.

The trope title refers to one of the many philosophies of the eternally quotable Friedrich Nietzsche, as seen on He Who Fights Monsters.