Recap / My Little Pony: Friendship Is Magic S7 E20 "It Isn't the Mane Thing About You" 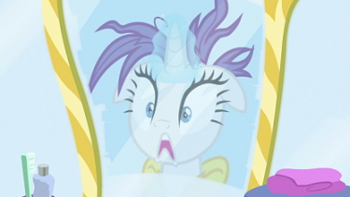 Rarity is preparing for a photo shoot with Photo Finish on the best manes in Equestria. While finishing up a to-do list, Rarity helps various ponies around town improve their sales. She helps the Flower Trio with color arrangements, helps a fan salespony with his storefront, and gets Davenport to see how to better his clientele. She stops by Sugarcube Corner, but Pinkie, throwing a party for the Cake babies, accidentally gets sticky silly string everywhere over the shop, including in Rarity's mane.

Since the string won't come out with brushing, Rarity and Pinkie visit Zecora. The zebra whips up super-shampoo for Rarity's mane and a potion remove the string from Sugarcube Corner. However, by accident, the identical looking potions gets swapped while Zecora warns not to try and fix a mane with magic, lest a pony invite disaster. As such, when Rarity examines her mane in the mirror after a shower, she's horrified to see her mane mostly missing, what little remains in sparse strands.

Rarity returns to Zecora, who promises to whip up a cure to fix the mistake. While this happens, Rarity attempts to conceal her mane beneath a cloak. It works, but nopony can recognize her, instead getting pushed back in line and having her fabulous look complimented by others who don't know it's Rarity beneath the cloak, causing Rarity to sulk. On accident, the hood of the cloak comes off, revealing Rarity's mane in public, causing her to flee to Twilight's castle. Twilight and Starlight attempt to fix Rarity's mane with magic, but like Zecora said, it doesn't work. Zecora herself enters the castle, telling Rarity she can't make a cure, but Rarity's normal hair should grow back on its own in time. However, this still leaves Rarity without a solution for the photo shoot.

Applejack tries giving Rarity a bonnet, but it won't work for the shoot. Rainbow Dash attempts to give Rarity a wig made of clouds, but it won't move with her. Fluttershy has her friends try and whip something up with leaves, but Rarity just gives up, saying her hair's a lost cause. The rest of the Mane Six and Starlight enter Carousel Boutique later, finding Rarity still sulking, eating gallons of ice cream. While Rarity says that the facts say that she's ugly, her friends remind her that she started a business empire and has helped countless ponies throughout her life. Rarity then realizes that the only one saying she was ugly was her, and ducks behind a changing curtain, coming out with a punk-inspired look that compliments her broken mane nicely. She returns to town to continue helping ponies, forgetting about the photo shoot and focusing simply on being her generous self.

Months later, Rarity's mane is back to normal. She's shocked to see her punk look on the front of the magazine for the best manes in Equestria. The Mane Six contacted Photo Finish, who took photos of Rarity while she was out and about. Now that Rarity is exemplified as beautiful on the inside and on the outside, her punk mane look starts catching on.