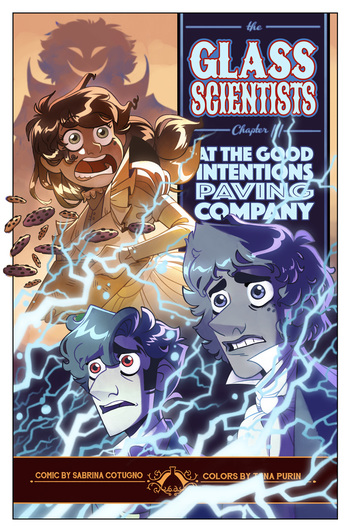 is an ongoing Gaslamp Fantasy webcomic about mad science, magical secrets, and monsters both within and without. It has a short stand-alone prequel, Bleeding Heart. The writer and artist is Sabrina Cotugno AKA Arythusa, who previously worked on Gravity Falls and as a director on Star vs. the Forces of Evil and The Owl House.

The city of London is not the best place to be a mad scientist. Thirty years after the death of the infamous Dr. Frankenstein, its citizens have gotten awfully good at killing creatures, destroying laboratories, and generally wrecking anything new or strange-looking. Soon, every scientist within city limits will find themselves behind bars, unless someone can turn their luck around, and fast.

This someone, it turns out, is a respected gentleman, an illustrious socialite who also happens to be a scientist himself. He believes that rogue science can survive — and thrive! — as he has, if only they could improve their reputation in the public eye – and he plans to give them one hell of an image makeover. Together with his Society for Arcane Science, he can end the reign of fear and superstition that has held London captive for decades so long as no one discovers his one little secret, a secret that could ruin him and unravel the lives of everyone he knows.

The Glass Scientists updates on Mondays, and the creator runs a blog

for readers' questions and inspirational art.