The Mirror Shows Your True Self 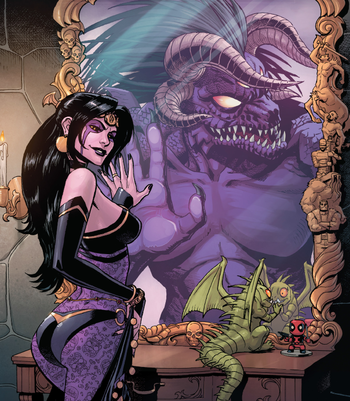 Engywook: Next is the Magic Mirror Gate. Atreju has to face his true self.
Falkor: So what? That won't be too hard for him.
Engywook: Oh, that's what everyone thinks! But kind people find out that they are cruel. Brave men discover that they are really cowards! Confronted by their true selves, most men run away screaming!
— The NeverEnding Story
Advertisement:

This is a trope for all the times a character's reflection in a mirror is different from what others (viewer included) see with the naked eye. In fiction, mirrors are treated as able to cause Glamour Failure in supernatural creatures, reveal Mind Control, and if the mirror is magical, reveal a character's true nature. The most common uses are revealing the true form of a Shapeshifter or soulless, and if a character is under Mind Control.

A modern variation has the true form of Glamour users revealed by a security camera, since glamour meant to fool human minds won't work on a mindless machine.

Another common variation is for the mirror to show an aspect of a person's personality. The nasty, spiteful, cruel, but beautiful girl becomes a hag in the magic mirror. Conversely, it can reveal the Reluctant Monster or balefully polymorphed character to be noble and good.

A subtrope of Magic Mirror, Glamour Failure, and Lie to the Beholder. If used on a poster or cover, might utilize Juxtaposed Reflection Poster. Compare The Shadow Knows and Mirror Reveal, which is about literal transformation. Contrast Missing Reflection, where the mirror shows nothing at all.

When Dana Barrett's head is scanned by Ghostbusters equipment, it shows a heatmap of her face. When Louis Tully, possessed by Vinz Clortho, is examined, the screen shows the heatmap of a Terror Dog.

When Dana Barrett's head is scanned by Ghostbusters equipment, it shows a heatmap of her face. When Louis Tully, possessed by Vinz Clortho, is examined, the screen shows the heatmap of a Terror Dog.