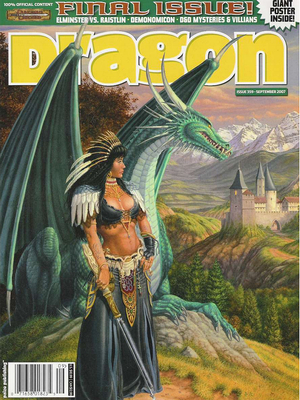 Dragon is the official Dungeons & Dragons magazine. Published from from 1976 to 2002 by TSR / Wizards of the Coast, the magazine was outsourced to Paizo Publishing (a company founded by WotC alums, now known for publishing Pathfinder) through September 2007 (issue 359). At this point Wizards took the license back from Paizo, and restarted it as an online-only version, in which format it continues to be published. In all incarnations, Dragon has been "100% official content", and much material that was first published in it has found its way into D&D gaming supplements; in this way, it has served as a proving ground for aspiring game designers. Three other publications were merged with it at various times—Little Wars (TSR's wargaming publication), Ares (for science fiction games that TSR acquired from SPI), and Living Greyhawk Journal (for WotC's organized play events).

From 1986 to its end Dragon was accompanied by Dungeon magazine, which provided premade adventures (mostly for Dungeons & Dragons). Like its sister publication, Dungeon is now online-only.

The magazine spun off several comic strips, including Knights of the Dinner Table, What's New? with Phil and Dixie, Dork Tower, and Nodwick. Additionally, The Order of the Stick ran a series of bonus strips in it.

A CD collection of issues 1-250 and its predecessor The Strategic Review was released in 1999. It is very much out of print. The reason for this is that TSR, when digitizing the issues, neglected to get any clearances for copyrighted material they didn't own (including the Knights of the Dinner Table strips), and predictably, they got sued by angry rightsholders who weren't going to receive royalties.

Not to be confused with a Japanese magazine called Dragon, which covers Japanese RPGs and includes manga, and was the original source of the manga for Slayers, Full Metal Panic!, Chrono Crusade, Record of Lodoss War, and other series.

If you are looking for a trope about the Big Bad's second-in-command, see The Dragon. If you're looking for large reptiles of some sort, see Our Dragons Are Different.