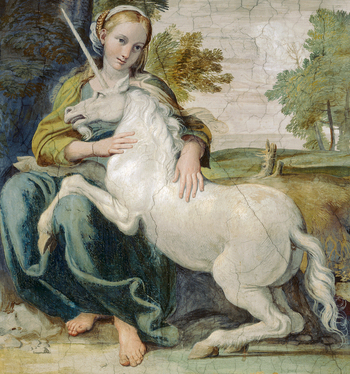 The gentle and pensive maiden has the power to tame the unicorn, fresco by Domenico Zampieri
Advertisement:

One of the most archetypal and well-known traits of the Unicorn is its affinity for virgin women. In legends where unicorns were characterized as either fierce and untamable or as incredibly elusive, a virgin maiden was said to be the only one who could tame the beast or draw it out of hiding. In works where unicorns are epitomes of benevolence and purity, virgin maidens are the only ones the creatures allow close to them — or, in certain cases, to ride them.

The precise definition of "virgin" can vary a lot. Some portrayals use a purely physical definition of virginity, with varying levels of strictness. Other works instead depict unicorns as just having an affinity for girls and young women in general, or as being attracted to women with a "pure heart" — which, itself, can mean any number of things, but generally involves the unicorn being in some way able to sense to moral character of others and only approaching those it finds sufficiently innocent, noble, benevolent or the like.

In cases where physical virginity is what matters, this may be applied to male virgins in addition to the traditional female ones. The virgin in question will often find the unicorn's attention to be acutely embarrassing.

In older works, and in modern ones based more closely on them, this often takes a darker twist — the maiden acts as a lure to expose and subdue the unicorn so that hunters can claim its horn, and its love for her brings the unicorn's doom.

An uncommon inversion has evil or corrupted unicorns who are attracted to what regular unicorns shun, typically either highly promiscuous people or just plain evil ones.

Subtrope of Unicorn, Nature Adores a Virgin and Virgin Power. Related to Only the Pure of Heart. For another mythical being with a similar but decidedly less innocent taste in human companionship, see Dragons Prefer Princesses.