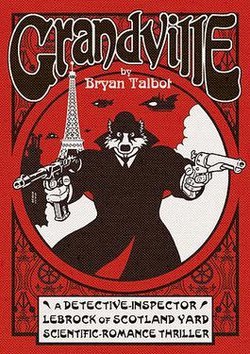 work of Funny Animal sketches (whose stage name was J.J. Grandville, the basis of the graphic novel's title), he made the graphic novel, along with inspiration from works of Arthur Conan Doyle, Quentin Tarantino and Rupert Bear.

Grandville is set in a fictional Steampunk Europe, where France won The Napoleonic Wars. The setting is full of anthropomorphic animals... although there have been appearances of humans. The series stars Detective-Inspector Archie LeBrock of Scotland Yard, a huge, muscular badger, solving mysterious cases along with his sidekick Detective Roderick Ratzi, a rat.

The series has concluded with five books released. The first book is simply titled Grandville released in October 2009, while the second book is titled Grandville: Mon Amour (My Love in French) that was released in December 2010. The third book, Grandville: Bête Noire ("Black Beast") was published in 2012. The first book focuses on solving a murder of a British diplomat, which is soon revealed to be part of a wider conspiracy. The second book is Archie tracking down a mad, escaped convict named Edward "Mad Dog" Mastock. The third book is set in France, beginning when LeBrock's French colleague Rocher asks for help solving a murder case, but it quickly turns out to be more than it seems. A fourth album, Grandville: Nöel was released at Christmas 2013, in which Archie investigates a cult led by a charismatic unicorn, and its connection to a sinister political movement. The final book is Grandville Force Majeure ("Superior Force"), published in 2017.

All books have been released in America by Dark Horse Comics. See Blacksad for another similar series (but with less fantasy).