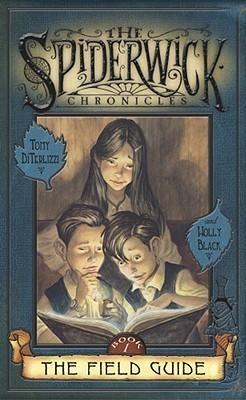 Their world is closer than you think.
Advertisement:

The Spiderwick Chronicles is a series of children's books by Holly Black and Tony DiTerlizzi. They chronicle the adventures of the Grace children, twins Simon and Jared and their older sister Mallory, after they move into Spiderwick Estate and discover a field guide, written by their great-great-uncle Arthur Spiderwick, detailing a world of faeries that they never knew existed.

It consists of the following books:

A sequel series, Beyond the Spiderwick Chronicles, has two step-siblings having to find a way to stop a rampage of fire breathing giants threatening the state of Florida.

Beyond the Spiderwick Chronicles consists of:

There are also some companion books, including a reproduction of the Field Guide itself.

The original series has a 2008 film, with the twins played by Freddie Highmore. Disney has announced plans for a streaming series adaptation for Disney+.

DiTerlizzi has also written a separate fantasy series called WondLa that has its own page.

The Spiderwick Chronicles provides examples of: