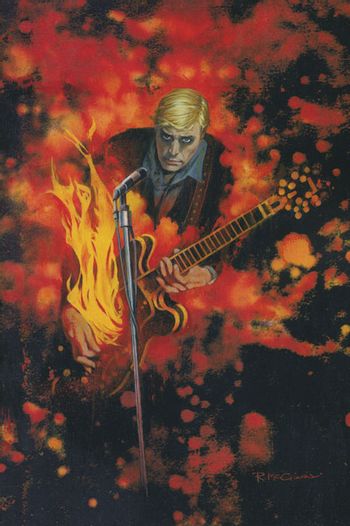 Stag Preston, as depicted by Robert McGinnis on the textless cover of the 2006 edition.
"…Stag Preston manages to capture a sensitivity that marks him as a performer of rare gifts. This is Stag Preston's show, from first to last, and he runs it with assurance, skill, and verve."
—From a review of Stag's film Rockabilly
"You want to know something, Stag? You stink, kid. You stink on ice!"
—Shelly Morgenstern, Stag's publicist
Advertisement:
"I'd do anydamnthing to get away from them self-made, pious assholes, and you'd better know I'll do the same to stay where I am."
—Stag Preston

First published in 1961 under the title Rockabilly, Harlan Ellison's novel Spider Kiss chronicles the career of Stag Preston, a (thankfully) fictional star from the early days of Rock & Roll, mostly through the eyes of Sheldon "Shelly" Morgenstern, the publicist who discovered him — and came to regret it.

Stag Preston has everything. Thanks to a beautiful singing voice, a commanding stage presence, a lot of determination, and a first-class support team, he's risen from the slums of Louisville, Kentucky, to worldwide stardom. A naturally talented singer and actor, Stag has used his wealth to create a life where any pleasure or luxury is available to him — and he rarely has to deal with the consequences. Yes, Stag has everything, except for two qualities he has never needed nor wanted — compassion and human decency. And those he can fake, at least while he's in front of a microphone or camera.

Stag is, to put it bluntly, a sociopath. He takes self-centeredness and Lack of Empathy Up to Eleven, and he'll instinctively abandon any friend, lover or ally the moment he no longer needs them. Also, with his insatiable appetite for sex and booze, he leaves a career-threatening mess wherever he goes. And the one who has to clean up Stag's messes is Shelly Morgenstern, right-hand man to Stag's current manager, Colonel Jack Freeport.

It was Shelly who discovered Stag (then known as Luther Sellers, "no relation to Peter") when he was just a talented kid working as a bellhop at a fleabag Louisville hotel, making a few extra bucks by leading suckers to illegal poker games, and singing on the side. Shelly recognized Luther's talent and charisma, so he brought him to The Colonel, who effortlessly overpowered the kid's original manager (Asa Kemp, a milquetoast bicycle shop owner) and started him on the road to fame and glory. Shelly renamed him Stag Preston, helped engineer his image, and made the deals that left him a rich, successful icon to millions of teenagers. And whenever Stag goes on a drunken rampage — which happens a lot — it's Shelly who keeps the latest incident out of the gossip columns. Every time he does so, Shelly becomes a little more disgusted with both Stag and himself. However, he's not disgusted enough to get off the Stag Preston gravy train — yet.

Stag thinks the good times will never end, no matter what he does. Shelly keeps warning him that his fans could turn on him in a moment, but Stag never listens. The situation seems too volatile to last forever; how long before Stag does something so terrible and irrevocable that Shelly won't be able to save him?

"These are Stag Preston's tropes, from first to last":