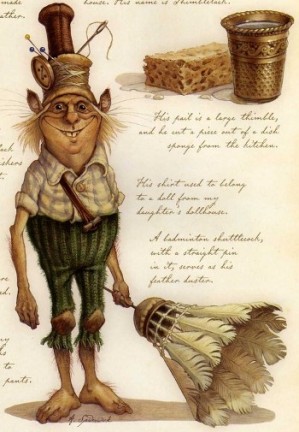 Scavenged Punk is a stylized setting that focuses on technology and culture based on an unusual source: scavenged junk. Weapons, tools, clothing, and sometimes entire cities will be built out of repurposed materials. A key factor here is that these materials, often pieces of trash, are being used for something other than their original purpose (as opposed to simply being repaired and reused). This trope shows up almost exclusively in two cases.

Firstly, it's used for After the End set stories in Scavenger Worlds where supplies are short and hence items from the past civilization must be used for basic necessities. Scavenged Punk specifically crops up when Improvised Armor (or Post-Apunkalyptic Armor) and Improvised Weapons are emphasized.

Secondly, it shows up in stories where beings smaller than human (rodents, bugs, corvids, Lilliputians, etc.) have urban civilizations and use materials scavenged or stolen from humans. Many stories with anthropomorphic animals will have this to an extent as part of a Mouse World, but only when it's strongly emphasized does it really become Scavenged Punk.

When technology is constructed in a much more limited capacity it is simply MacGyvering. Note that while Scavenged Punk is not exclusively a fiction trope, most real life examples fall under MacGyvering or Scavenger World. Also contrast with Bamboo Technology where technology is built from rudimentary natural materials but not junk, and Resurrect the Wreck, when broken or abandoned technology (usually a vehicle) is rebuilt enough to work.

A Sub-Trope of Improvisational Ingenuity