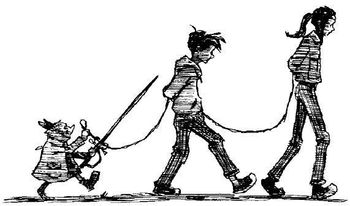 In action and fantasy settings a way to create drama is to have a character captured by some group of people and pushed along with their hands tied. This is a slow-moving tension scene, the captives sometimes even at sword-point, spear-point or gun-point. In some cases a whole group of people are taken this way, and they may have a rope leading from each prisoner's hands to another prisoner's hands. This configuration may enable communication or using the joining chain or rope as a trip wire to capture the captors.

Sometimes the captor is holding a rope attached to the captive's hand and pulling them along by the rope. Expect the captives to yank back and knock the captor down, pull them into bushes and beat them up, or spin the rope around them to reverse capture. In any case, the fact that the character has been allowed to walk instead of being caged or carried suggests that they may get out or use the added freedom to their advantage. Typically they can fight with their hands tied.

Additionally, the positioning of the captor and captive in this way will allow the captor to be immediately presented as the Bad Guy by being unnecessarily violent or to show whichever individual has charge of the captive may be kinder than the Big Bad by instead being gentle or not fighting back.

Compare Tribal Carry where hands and feet are bound.

This is Truth in Television, since it's often easier to transport prisoners this way - tie their hands so they can't fight, but have them able to walk so you don't have to carry them. The necessary push or pull is also this, as people without the use of their hands can quickly become uncoordinated. Unless used for another purpose, prisoners simply linked by ropes or chains to add realism is not this trope.