Literature / The Voyage of the Dawn Treader 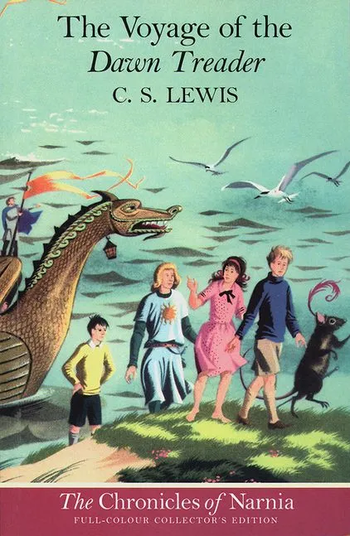 "My own plans are made. While I can, I sail east in the Dawn Treader. When she fails me, I paddle east in my coracle. When she sinks, I shall swim east with my four paws. And when I can swim no longer, if I have not reached Aslan’s country, or shot over the edge of the world into some vast cataract, I shall sink with my nose to the sunrise."
— Reepicheep
Advertisement:

The third installment of The Chronicles of Narnia and the fifth book chronologically, which takes place a year later in Earth-time (and 3 years later in Narnia Time) since the previous installment, Prince Caspian. Along with an unpleasant cousin Eustace Scrubb, Edmund and Lucy return to Narnia and travel with now-King Caspian to the edge of the world, where he is searching for exiled Telmarine lords who were loyal to his father. On the journey, their cousin is turned into a dragon, and they encounter many wonders on an adventurous voyage, at the end of which, Lucy and Edmund, like Peter and Susan in the last book, are told they will never return to Narnia.

Much of the book is inspired by The Odyssey, with analogous scenes and plot elements.

Like the two previous Pevensie stories before it, The Voyage of the Dawn Treader was adapted into a film of the same name in 2010; it featured Will Poulter as Eustace Scrubb alongside the returning cast. Note that unmarked spoilers follow for viewers of the film who have not read the book, which is one of the series' most popular installments.