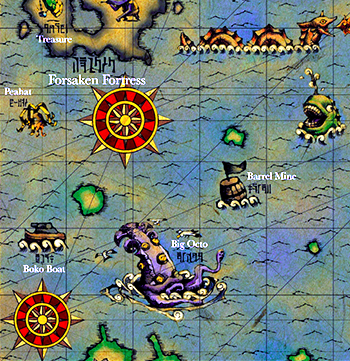 Adventure, adventure everywhere! And not a drop to drink.
[T]he sea has never been friendly to man. At most it has been the accomplice of human restlessness, and playing the part of dangerous abettor of worldwide ambitions.
— Joseph Conrad, The Mirror of the Sea, ch. XXXV
Advertisement:

The ocean has always been a thing of wonder, fear and reverence, a dangerous road leading to strange and distant things. It's difficult to navigate — often impossible unless you can read the stars well — journeying upon it was filled with risks, and straying from known routes could easily get a ship terribly lost. However, skillful or daring travel could lead one to distant lands, unknown places and great riches. Consequently, there is a long and well-established tradition of romanticizing sea travel, and of stories set upon the sea becoming tales of wonder, danger and strange mystery.

The ocean itself is typically presented as a place of chaos, mystery and inconstancy, a vast and powerful force hiding its secrets well beyond the sight of sailors skimming along its surface. Travelers upon the sea are at the whim of tides, currents and winds largely out of their control, which may be equated with the actions of spirits, gods or fate, and at any moment storms may boil into existence, monsters rise out of the deep or a pirate ship appear over the horizon. At the same time, fortune may easily smile on a skilled or lucky traveler; much as the unknown depths of the sea may hide terrors, they may also hold incredible things — sunken ships, lost treasure, natural wonders or potential allies may all be found among the waves. This sense of gambling with fate, of heading out into an alien realm without knowing what will be behind the next wave, is often a major part of this sort of stories.

The other major element of the Ocean of Adventure is its islands. Isolated islands and distant shores tend to act as their own microcosms, each home to some new group, individual, creatures or phenomenon unbeholden to what's found on the mainland or on other islands. This allows stories to move between radically different settings and circumstances as the characters move from island to island, with each one holding some new trial, peril or wonder. As a result, the Wacky Wayside Tribe is an extremely common plot element in stories set in these oceans.

Characters may have many different reasons to set out across these seas, but desire for adventure, lust for wealth and treasure or simply being blown horribly off-course are all fairly common. Regardless of cause, however, journeys across the Ocean of Adventure will be neither short nor easy. Sailors and explorers typically find themselves battling with a plethora of storms, foes and misfortunes, wandering from island to island and losing their ships, their crews and their belongings, often only limping back to port on rafts or other improvised craft after many months or even years away from home.

Most of these adventures takes place on the ocean's surface, but it's not uncommon for them to be set deep beneath the waves as well, taking a much more personal look at the mysteries and terrors of the depths.

Of note is the fact that most of these elements translate fairly seamlessly into space-age settings, especially ones of the softer side of science fiction — Space Is an Ocean for a very good reason, and the depths of space, mysterious phenomena and alien planets easily play the roles of the sea, storms and islands of the Ocean of Adventure. Similarly, when The Sky Is an Ocean, it also tends to be depicted in this manner, with flying ships and floating islands replacing the usual kinds.

The Island of Mystery will often be found here in great numbers. Sea Monsters and Turtle Islands are often a common part of the marine fauna. Characters found sailing these seas are likely to be Bold Explorers, Born Under the Sail or Pirates of various moral stripes, and to sail Cool Boats. Ports here are likely to be Adventure Towns.

Compare Wooden Ships and Iron Men, Tropical Island Adventure, The Sky Is an Ocean, Awesome Underwater World and Ocean Punk. This is often the state of the seas in an Adventure-Friendly World.