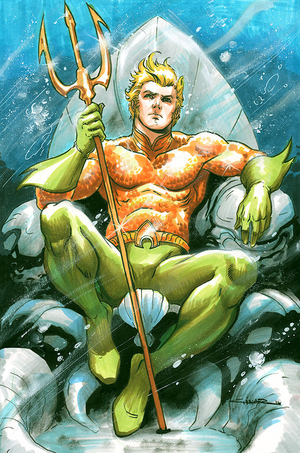 "At thirty, the prime of a mermaid's life, her tailfin splits in two so she can live on land. Mermaids are a mysterious species."
— Kokoro, One Piece
Advertisement:

So you have mermaids and -men, half-human half-fish (or part seal, dolphin, whale) who come with their own set of problems. Then you have Fish People who are humanoid but scaly; think of the Creature from the Black Lagoon.

Then there's these characters. They look so human that they could wander unnoticed down a city street, but can breathe and live underwater. In fact many prefer to live underwater as that is often where they were born, and they only come to the surface to complain that Humans Are the Real Monsters for polluting the ocean, or to do some superheroing. In fact if they are unused to life on land they may find themselves acting like a Fish out of Water.

This can include anything from an individual who has this ability as a special quirk, to whole civilizations of these who may or may not live in an Underwater City.

Often overlaps with Walk, Don't Swim, Water Is Dry, and Water Is Air. Compare Human Aliens, where "alien" species look exactly like humans do, yet count as aliens. Subtrope of Our Mermaids Are Different.