Just Woke Up That Way 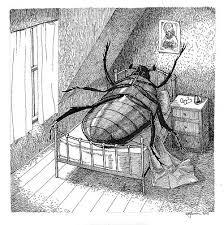 And from here on in, his day just gets worse...
"As Gregor Samsa awoke one morning from uneasy dreams he found himself transformed in his bed into a gigantic insect."
— Franz Kafka, The Metamorphosis
Advertisement:

It's morning; time for you to wake-up. You're still groggy, but you manage to roll out of bed, same as always. Maybe you feel weird; maybe your bedroom seems out of place somehow, but you're still too tired to think about it. So you stumble to the bathroom, splash some water in your face, blink the sleep from your eyes, look at yourself in the mirror and...

It's not your face in the mirror! At least, not the face you had last night. Maybe you've switched sexes; maybe you've become the one thing you hate most; maybe you've switched bodies with someone or turned into a giant insect, but whatever it is, you're not you anymore. You have been transformed without your knowledge or consent and it happened while you were sleeping. You don't know how or why it happened; you just woke up that way!

This is extremely common in stories about involuntary shapeshifting, particularly if the writers are trying to shock the audience. Shapeshifting Excludes Clothing may supplement, to added shock effect. In situations where the source of the transformation is not rapidly explained, this overlaps with Ontological Mystery. Just don't be surprised if it turns out to be All Just a Dream.

Likely also an Oblivious Transformation, if the transformed character takes a long time to notice something is amiss. When this is discovered via a mirror, it's a Mirror Reveal.