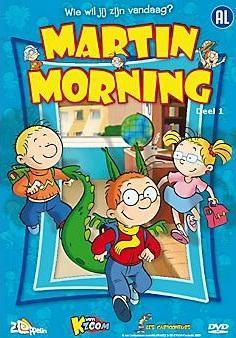 Notice how the boy in the middle has dragon ears, wings and a tail?note From left to right: Gromo, Martin Morning, and Roxanne.
"It only happens to me..."
— Martin Morning, at the end of the theme tune
Advertisement:

The show stars Martin Morning, a perfectly normal nine-year old boy... expect for the fact that every morning, he wakes up to finds himself transformed into something different, and finds himself thrown into all sorts of adventures as a result of his transformations, on which he is accompanied by his friend Gromo and his girlfriend Roxanne.

In 2018, after sixteen years of no new episodes, the show was renewed for a fourth season, which also brought about an art shift to Flash animation.

Has an in-progress recap page.