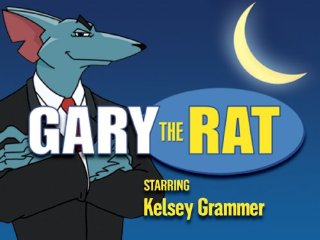 Gary the Rat (2003) was an adult-oriented, animated television series created by Mark & Robb Cullen. It starred Kelsey Grammer as an Amoral Attorney named Gary Andrews who, one day, discovered that his ruthless tactics have earned him a Karmic Transformation — he's now a 6-foot-tall anthropomorphic rat, who must struggle to keep his job at the Harrison, Camille, Beckett & Weiss law firm, while simultaneously warding off local exterminator Johnny Bugz, who is hellbent on killing him. The series lasted one season of 13 episodes on Spike TV and was introduced to the world as a small series of webisodes.