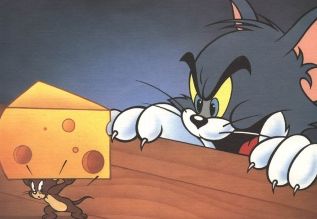 There are hundreds of varieties of cheese in real life, in several distinct "cheese families." Not bad for what is, bluntly put, spoiled (and sometimes moldy) milk. However, regardless of anything else, almost all cartoon cheese has three main traits, plus an occasional fourth:

Cheese which is not this strange amalgam of traits (well, at least the first three) is almost never present, except sometimes incidentally as a sandwich ingredient. The most likely trait to get skipped is the "stinky" part (unless the stinkiness of the cheese is a plot point). Orange-yellow cheese that's full of holes is still everywhere. Cheez Whiz doesn't show up too often, perhaps because animators fear viewers will mistake it for mustard.

In addition to Swiss and Limburger just being funny, there's a practical reason for this trope, based on the Rule of Perception. In a cartoon, a large, nondescript block of something yellow or white could be just about anything. A bar of gold? Butter? Lard? A white brick? Giving it these distinct traits helps identify it as cheese to the audience. Of course, this works best if you don't name the cheese in question.

Commonly seen as part of a Level Ate.