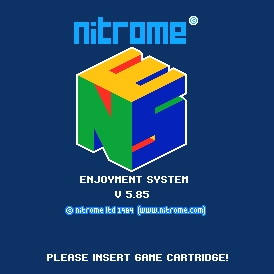 Nitrome is a British independent game developer founded in 2005 and known for its Flash games as well as mobile games, many of which are on Miniclip. Nitrome's games often have highly unusual gameplay that forces the player to think well outside the box. Combined with their games' quirky nature and appealing graphics, Nitrome's library has become quite popular with many Flash game players.