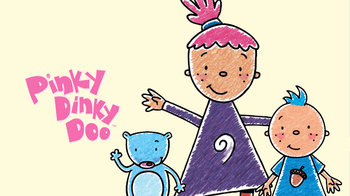 Now that's something you don't see everyday.note Left to right: Mr. Guinea Pig, Pinky and Tyler.
"Pinky's got a story she wants to share with you!
Pinky Dinky Doo
Never at a loss for words she pulls out of the blue...
Pinky Dinky Doo"
Advertisement:

Pinky is a seven-year-old girl who lives in Great Big City with her parents, her four-year-old little brother, Tyler, and their pet, Mr. Guinea Pig. When a problem arises, Pinky dances her way to a cardboard box called her Story Box with Tyler and Mr. Guinea Pig and uses a piece of chalk and her imagination to tell a story. In the second season, Pinky uses the Story Pad, a notebook in which Pinky draws pictures for her newer made-up stories, whenever the Story Box is not available. After Pinky tells her story and solves the problem of the day, kids are invited to play an interactive game on the Cheese Sandwich toy, where they review details about the story.

This series was created by Jim Jinkins, who originally made up Pinky's adventures as bedtime tales for his children. The first season was a co-production of Cartoon Pizza, Sesame Workshop, CBC, and Discovery Kids. In the second season, the Canadian studio Keyframe Digital and Abrams Gentile Entertainment signed on as production companies. The show aimed to enhance preschool-aged viewers' early literacy.