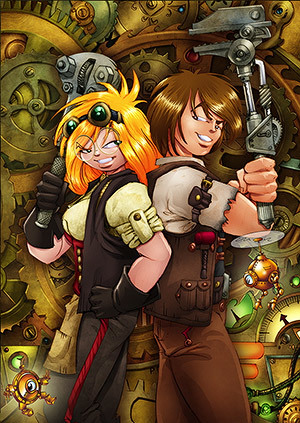 "People keep giving me rings — but I think a small death ray might be more practical."
— Agatha

is a webcomic (originally a print series) by Phil and Kaja Foglio, which has become one of the classics of the Steampunk genre, though the creators describe it as Gaslamp Fantasy.

The title character of the story is Miss Agatha Clay, who begins as a teen lab assistant to a Mad Scientist, one of a coterie of such individuals known to the world as "Sparks". Despite her interest, hard work and tuition, she is frustratingly bad at mechanics, for reasons far greater than she's ever realized. It's hardly a spoiler to say her problems stem from the fact she is actually the last of a legendarily powerful Spark family, her powers and identity hidden even from herself to keep her safe. Of course, that kind of secrecy never lasts forever, and her ensuing adventures now span multiple volumes.

, "We recommend Girl Genius for an audience of teens and up". It was the winner of the Graphic Story

Hugo Award for three years running (2009-2011).Fun Fact The Foglios actually removed themselves from the running in 2012 because they wanted to give others a chance to win and prove that the award was viable. Since returning to the category, they were nominated for one more award (in 2014), but did not win.

The Foglios have also written novelizations of their comic:

Talk about the comic in our discussion forum