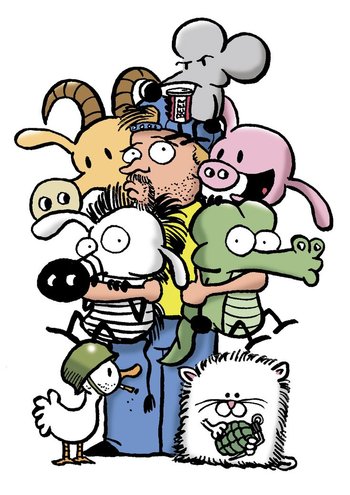 Clockwise from the top: Rat, Pig, Larry, Snuffles, Guard Duck, Zebra, Goat, and Stephan Pastis.
Pig: I'm sorry, Your Honor, I'm Rat's co-counsel, Pig... He asked me to ask you for a... uh... continuance?
Judge: What for?
Pig: He's traveling cross-country in diapers to kill someone.
— August 25th, 2007

An American Comic Strip drawn by former lawyer Stephan Pastis about the lives of Rat, Pig, Zebra, and Goat, anthropomorphic Civilized Animal suburbanites operating freely in a human world just slightly off-plumb from our own. They are, naturally, a rat, a pig, a zebra, and a goat. The strip serves partly as a chronicle of their amusingly surreal adventures, partly as a satire of modern American society, partly as a meta-commentary on the state of the modern American comic strip (not surprisingly, it isn't impressed)... and partly — some suspect mostly — as an excuse to let off really, really awful puns.

Pig is a perpetually cheerful innocent who sails through life just barely aware enough to survive. His best friend and roomie Rat, a wannabe author, is a cynical, totally unrepentant Jerkass and Deadpan Snarker constantly on the lookout for a quick buck. Their neighbor Goat is much more intelligent and well-read than the other characters; thus his default expression tends to be "Why do I put up with these morons?"

Another neighbor, gentle, sensitive Zebra, was originally intended to be a one-shot character but was soon elevated to star status. He was originally determined to save his herd from becoming prey to lions, either through schemes to thwart them (such as dressing in costumes...unfortunately, they dressed up as gazelle) or attempts to communicate with them (but the lions tend to respond to his moving letters with "Yu taste gud!")

Later in the strip, crocodile fraternity Zeeba Zeeba Eata moved in next to Zebra, and their idiotic attempts to capture and eat him have become one of the most popular aspects of the strip. The crocs' horrible grammar is about the most offensive thing about them.

Peripheral characters include Pig's pet Guard Duck, who calls his master "Sir," patrols the neighborhood with a rocket launcher and occasionally declares war on Venezuela; Zebra's cat Snuffles, a truly evil little ball of cute fluff who among many other things hid the WMDs for Saddam Hussein; Pigita, Pig's sometime girlfriend - "sometime" because he takes romantic advice from Rat; Wee Bear, the strip's resident social issue obsessed male Soapbox Sadie; Farina, Pig's sister, who lives inside a plastic bubble and is the only person Rat ever loved; Junior, the young vegetarian crocodile; and Andy the creatively optimistic little dog across the way, who never fails to make the best of being chained up in his yard and forgotten.

Pastis himself makes frequent appearances in the strip, usually to announce/explain changes in the strip or be chewed out by Rat - or both.

Has a developing character sheet.