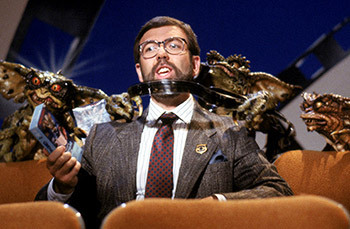 "What's fun about a movie full of ugly, slimy, mean-spirited, gloppy little monsters who run amok and attack innocent people?"
"If anyone really pisses you off, depict them in your comic as a ridiculous strawman and mock them with infuriating self-righteousness. You know, kind of like exactly what I'm doing now."
— Ben 'Yahtzee' Croshaw, offering some advice for budding webcomic artists.

A specific form of Take That!, in which the producers of a show respond to criticism of the show through the show itself, either through subtle in-jokes that obliquely refer to the criticism, putting lines of dialogue into the mouths of the characters, or presenting parodies of their critics. The program may even break the fourth wall to directly address the critics.

Depending on the producer, this can come in many forms; gentle ribbing or parody of the critics and their position, pointed rejoinders, triumphant gloating, and — in extreme cases — over-the-top bile that leads to the strong assumption that the critics may have struck a delicate nerve (either that, or the producer just plain Can't Take Criticism).

Sometimes features the Straw Critic. Inverted Trope of Caustic Critic. This also qualifies the show as an Author Tract.

Compare Take That, Audience!, when it's the viewers who are targets of in-show satire. See also Dear Negative Reader, when the creator directly addresses the critics without the vehicle of the show, and Insult Backfire, when the critics' own words are used against them.