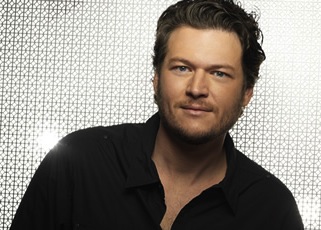 Born on June 18, 1976 in Oklahoma, Blake Tollison Shelton is one of the leading males in 21st century country music.
Advertisement:

Shelton launched his career in 2001 with the single "Austin" on Giant Records. Although the label quickly closed, the song's fate was unharmed, as parent company Warner (Bros.) Records quickly picked up the song and pushed it to a five-week stay at number 1. Second album The Dreamer included another number 1 in "The Baby", but the other two singles did not fare as well. He quickly bounced back with the cheeky "Some Beach" in 2004, and saved the flagging Pure BS album with a re-release that included a cover of Michael Bublé's "Home". Startin' Fires also included the chart-topper "She Wouldn't Be Gone".

In 2010, Shelton chose to release two extended plays a year. These included Hillbilly Bone and All About Tonight, the title tracks of which were among his many number ones. Since these did not sell well, he returned to a full album in 2011 with Red River Blue, and Based on a True Story... in 2013. Shelton has been paired with producer Scott Hendricks since Hillbilly Bone, and has maintained a mostly uninterrupted streak of #1 country hits.

Shelton was married to fellow singer Miranda Lambert from 2010 to 2015 and became engaged to pop singer Gwen Stefani in 2020. He is also a vocal coach on the musical competition The Voice.