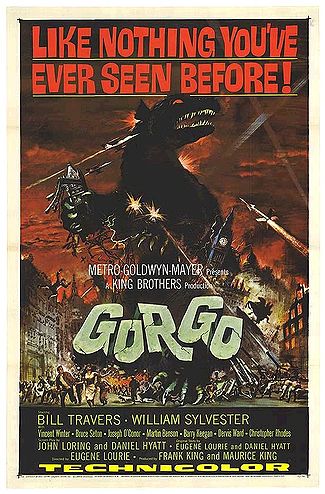 Actually, we have seen something like this before. Quite a few times, in fact.
Advertisement:

Some British treasure hunters, headed by Captain Joe Ryan (Bill Travers) and first officer, Sam Slade (William Sylvester), are salvaging around Nara Island off the coast of Ireland when the region is rocked by an underwater volcanic eruption. Their ship is forced to dock for repairs. Ryan and Slade meet with the harbour master and learn that two divers in his employ have disappeared. One such diver is then found having died from fright. That night, the eponymous Gorgo emerges from the sea and trashes the harbour. Ryan offers to capture the creature, and succeeds in doing so. Gorgo is taken to London where he is put on display in a circus, against the wishes of the scientists who insist this could be dangerous. And yes, sure enough, said scientists are right. For it turns out the 65-foot tall Gorgo is just a baby. His fully-grown and very angry mother then emerges, and she wants her darling baby back...

This 1961 film was featured on the ninth episode of the ninth season of Mystery Science Theater 3000, being one of the better films showcased on the show.

Also had a Comic-Book Adaptation published by Charlton Comics, some of which had art done by Steve Ditko (digital version here

), and a Novelization by Carson Bingham.