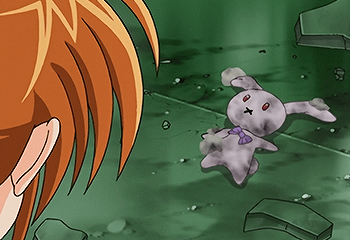 Ragged rabbit resting on the green ground in a sad shot.
"Something about that doll there on the desolate plain struck a note of terrible sadness in Sister's heart. Where was the child to whom this doll belonged? Blown away with the wind? Or buried and lying dead under the earth?"
— Robert R. McCammon, Swan Song
Advertisement:

Whenever a movie wants to add pathos to a war or crime scene, expect a shot of an abandoned toy, usually a doll or stuffed animal. Teddy bears and bunnies seem to be the most popular, and the more worn and tattered the better.

In evacuation scenes, the toy is supposed to represent the loss of innocence a child has suffered. In scenes depicting the aftermath of war or other disasters, the doll is supposed to scream "KIDS DIED HERE!" without having to actually show a kid's corpse. That said, a really gutsy director may combine the doll with a Dead-Hand Shot and show the child's hand still clutching the doll without showing the rest of their dead (and presumably mangled) body.

When used well, can undermine the A Million Is a Statistic effect.

With an adult character, it may be some other Iconic Item if it's not a hat.

See Also: Improbable Infant Survival, Hide Your Children. May be located at an Abandoned Playground. Frequently overlaps with Censored Child Death. A related (but gorier) trope is the Dead-Hand Shot.