Film / The Emperor and the Assassin 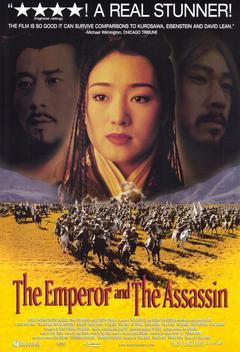 The Emperor And The Assassin (original title: 荊柯刺秦王) is a movie about the rise of the First Emperor, directed by Chen Kaige and released in 1998. At the time, it was China's most expensive film ever produced. It starred Gong Li as Lady Zhao, Li Xuejian as Ying Zheng, and also had Zhou Xun in a supporting role.

In the third century BCE, as China is in the throes of the Warring States era, the ruthlessly ambitious Ying Zheng turns his realm of Qin into a fearsome military machine and poses a growing threat to the existence of the six other kingdoms. Ying's favored concubine, Lady Zhao, suggests a ploy that would give Qin a casus belli to invade the rival state of Yan: she will have her face branded and use it as a pretext to defect to Yan, where she will convince the king to send an assassin to kill Ying.

The best hit man in Yan, Jing Ke, is chosen for the mission, but Lady Zhao discovers he has chosen not to kill again, and is living the rest of his life as a beggar. As she learns about the circumstances of his choice, Lady Zhao begins falling in love with Jing Ke, and after witnessing the brutal slaughter of children by the Qin army in her home state of Zhao, genuinely allies with Yan against Qin and wants the assassination attempt to succeed. Jing Ke, however, fails to kill Ying, and the latter is now free to complete his takeover of the land and become Qin Shi Huangdi, the First Emperor of China.