Film / The Hobbit: An Unexpected Journey 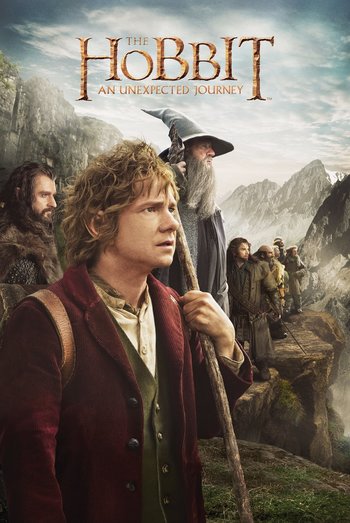 "It began... well, it began as you might expect. In a hole in a ground, there lived a Hobbit."
"You will have to do without pocket-handkerchiefs, and a great many other things before we reach our journey's end, Bilbo Baggins. You were born to the rolling hills and little rivers of the Shire, but home is now behind you; the world is ahead."
— Gandalf the Grey
Advertisement:

The Hobbit: An Unexpected Journey is the first film in the three-part cinematic adaptation of J. R. R. Tolkien's classic fantasy novel The Hobbit, directed by Peter Jackson and adapted for the screen by Jackson and Guillermo del Toro. It is a prequel to Jackson's adaptation of The Lord of the Rings, telling the story of eponymous hobbit Bilbo Baggins's (Martin Freeman) adventure with the wizard Gandalf and a company of dwarves. It was released on December 2012.

The film starts with Bilbo Baggins having a peaceful life in the Shire. One day, Gandalf shows up at his house and tries to convince Bilbo to go on an adventure. When Bilbo refuses, Gandalf invites a party of thirteen dwarves for dinner regardless. Bilbo discovers that the dwarf leader is none other than Thorin Oakenshield, and they plan to reclaim their homeland of Erebor from the dragon Smaug. Despite his reservations, the next morning Bilbo decides to follow the Company, beginning a journey that will change his life forever, and also of all the Middle-Earth...

Followed by The Desolation of Smaug.

An Unexpected Journey contains examples of:

open/close all folders
Tropes A to K
Tropes L to Z
♫ Far over the Misty Mountains cold
To dungeons deep and caverns old
We must away, ere break of day
To find our long-forgotten gold... ♫
Feedback