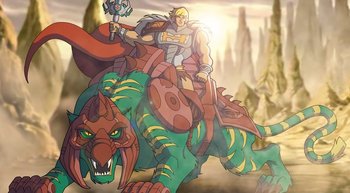 In Speculative Fiction, especially video games, there's a habit of utilizing animals as full-fledged war machines, rather than just mounts or for pulling. This makes a fair bit of sense, especially in fantasy worlds: if there are three-ton, fire-breathing dinosaurs in your kingdom and they can be trained to follow orders, sooner or later somebody's gonna get the idea to unleash them on people they don't like.

The creature either uses its natural abilities and/or has various platforms and/or instruments of destruction lashed to its side or across its back that human(oid) riders can use in battle (or that it can use itself if intelligent enough and physically capable). This can be as simple as a Howdah or other platform from which your soldiers can fight, but weapons like ballistae, cannons, and other mechanisms are also common. Typically they're as willing and able as their owners to charge into bad odds, discriminate between their side and the enemy while fighting, and die for the cause. Again, this can be fairly well justified, depending on the trainability and/or intelligence of the fictional animals in question; some might even be Sapient Steeds.

Depending on their intelligence, they may be capable of working independently.

See our Useful Notes page on Military Animals for this trope in Real Life.