Put Down Your Gun and Step Away 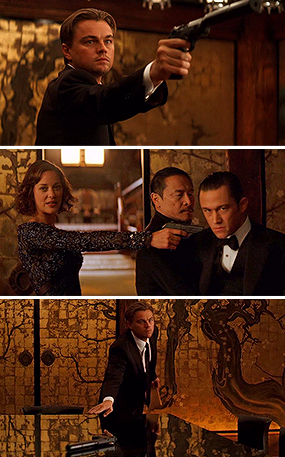 "In a hostage situation, you have to be Cruel to Be Kind. The more you care, the more leverage they have. Like buying a car, you have to make them think you can walk away."
— Michael Westen, Burn Notice, on the reality of this trope
Advertisement:

Classic variant of the Hostage Situation. The villain has a hostage in his grasp, and a gun pointed at said hostage's head. The hero(es) barge in with guns out. Villain tells the heroes to get rid of their guns or the hostage gets it. ("Kick them towards him." "Put them down and step away." etc.)

The heroes will do exactly that, and it's usually only a stroke of luck that saves them from the villain just plugging them right then and there, or worse, killing the hostage anyway. That or a case of Bond Villain Stupidity. It's implied that karmically this is the right thing to do, though, so that stroke of luck will happen nearly every time as a "reward."

Even trained police and military will do this, which goes against every rule and all logic in real life in regards to this situation. In fact, there was an episode of COPS where we see the trainer emphatically tell the police officers to never take their gun off for a hostage taker.

A possible reason why this works in fiction is that Evil Is Cool in there. In Real Life, criminals are far more cowardly and most definitely not cool. On the other hand, hitting an object as small as a person's head at more than a few paces with a handgun is really difficult, so it's more of a case of psychological pressure on a cowardly criminal that makes this trope far from Truth in Television, but that could be said of most cases of defensive firearm use.

The main problem with the situation is that the hostage taker, barring the occasional ones who are willing to give their life, doesn't want to shoot the hostage much more than the heroes do. If they were to kill the hostage because the heroes refused to drop the guns, there is suddenly nothing to keep the heroes from using said guns. However, the characters almost never think this through.

This is usually not Truth in Television: real-life police and military forces train their people to never put down their guns in a hostage situation, because if you do you'll just end up with a dead hostage and a dead hero.

Alternative Title(s): Put Your Gun Down And Step Away