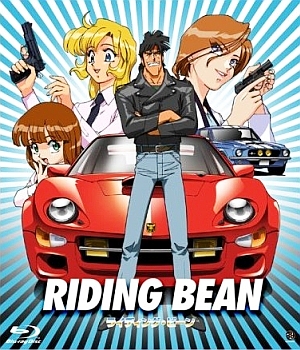 Riding Bean is an Anime OVA produced by studio AIC, created by Kenichi Sonoda and directed by Yasuo Hasegawa, released in February 22, 1989 with a run-time of 48 minutes.

Set in Chicago, the anime OVA follows the exploits of Bean Bandit, a professional getaway driver (Think The Transporter) who's been framed for kidnapping the daughter of an electronics CEO. Using a series of tricks, clever plots and disguises, Bean and his friend (and trigger-woman) Rally Vincent attempt to avoid being captured as they work to clear their name. With many a good plot twist and a interesting story and plot, the OVA was well received.

This OVA was supposedly the pilot for a suggested Anime series, but a falling out between Kenichi Sonoda and Toshiba EMI over the series left it with only one episode. Quickly moving on, Riding Bean served as a pilot of sorts for the related project Gunsmith Cats that Kenichi Sonoda went on the create in its place. GSC featured a redesigned Rally as the main character, with Bean making a number of appearances.

A Manga adaptation of Riding Bean was also produced by Kenichi Sonoda in 1989 but was left unfinished after four chapters due to the cancellation of Monthly Comic Noizy, the Japanese magazine in which it was published.

It's also notable for being one of the few Animes to have a soundtrack composed and performed entirely by a foreigner. In this case, Jazz Fusion keyboardist David Garfield and his band.

, a sequel to Riding Bean.

When Rally wakes Bean up with a frying egg after failing to do so with a taser, Rally delivers a blood-curdling scream as the camera pans away from the apartment.

When Rally wakes Bean up with a frying egg after failing to do so with a taser, Rally delivers a blood-curdling scream as the camera pans away from the apartment.