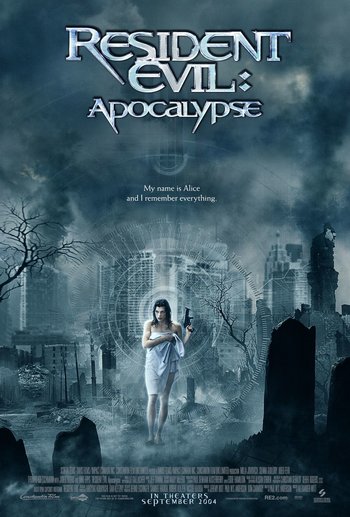 The evil continues...
Resident Evil: Apocalypse is the second film adaptation of the Resident Evil franchise. It occurs some time after the events of the first film. The Umbrella Corporation decides to reopen the Hive and figure out what happened, but its decision proves disastrous: the T-Virus infects one of the scientists, which lets it travel outside of the Hive and into nearby Raccoon City.
Advertisement:

Sometime after the living dead have overrun the city, Alice awakens in an abandoned hospital. When she leaves the building, she finds herself in the middle of a city devastated by the chaos that follows a zombie attack. She finds allies in S.T.A.R.S. officer Jill Valentine and Umbrella Corporation mercenary Carlos Oliviera, who (along with a group of survivors in tow) all hope to find a way out of the city before Umbrella can initiate its final countermeasure (a tactical nuclear strike) to prevent the T-Virus from spreading outside of Raccoon City.

Umbrella doesn't want any survivors, however, so it decides to send in the "Nemesis Project" to take care of any stragglers...