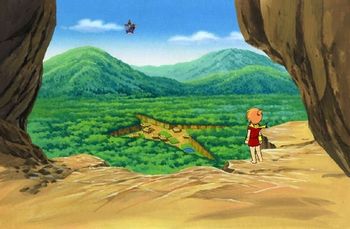 What happens when you combine The Legend of Zelda and Naruto? You get Shounen Kininden Tsumuji, a Japanese adventure game released in February 25, 2010 that follows a boy named Tsumuji, who along with his younger brother, go on an adventure to save their beloved mother as well the rest of their friends who were turned to stone by Dark Ninjas. Their journey will not only save their home, but their entire land as well.

A One-Shot manga based on the game before it was released can be read here.

it has a much more serious tone than the game itself.