Video Game / Spanish For Everyone 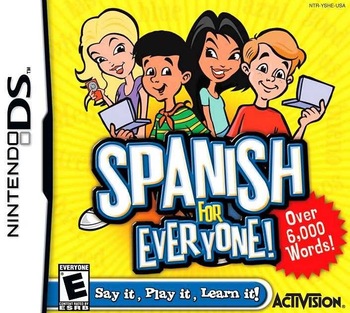 Spanish for Everyone is a 2007 educational game for the Nintendo DS, developed by Humagade and produced by Activision. A young boy, Shawn, has lost his brother's Nintendo DS after his friend, Miguel, accidentally takes it home with him to Mexico. It's up to Shawn to travel to Ensenada and get the DS back, and learn some Spanish from an interesting cast of characters along the way.

The game is notable for its interesting story and an impressive dictionary of nearly 6,000 words in both English and Spanish, all fully voiced.

Spoiler Warning: Due to the game's premise and numerous twists, there will be some unmarked spoilers below simply by showing the existence of certain tropes.