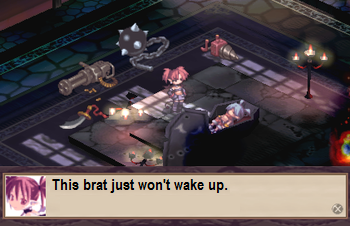 She used all those instruments to try to wake him. Even the minigun.
"I know how much you like to sleep in, so I'm guessing this letter will be your alarm clock this morning. Did I guess right?"
— Zelda, The Legend of Zelda: Skyward Sword note (She did)
Advertisement:

Kid Heroes in video games usually aren't granted the courtesy of starting their adventure out in the thick of combat. That would just be cruel, unless they're being forced to undergo Training from Hell. In many cases, if the main character in a role-playing game is no more than sixteen years of age, they'll likely start the game in bed, sleepy and bleary-eyed. A sibling, parental figure or, if it's a Dating Sim, Patient Childhood Love Interest will usually be the one to awaken the hero, informing him/her that they're Late for School/an audience with the king/a date with their love interest.

Very often begins with a dialog box on an otherwise empty black screen, which fades in to reveal the hero in bed after the person speaking has yelled at him to wake up a few times. Depending on how connected the character is to what is to come, there may be a prophetic dream as a form of prologue beforehand.

This is an easy way to get the character into their Morning Routine, giving the audience a tour of their daily life. It may not look good for the character if they wake up and find out they can't remember a thing about themselves.

Related to what the Turkey City Lexicon refers to as "White Room Syndrome," which is symbolic of the author starting the story without any idea of the plot or characters.

A form of Easing into the Adventure. May be the "wake up and go to school" in Wake Up, Go to School, Save the World. Compare Morning Routine. Not to be confused with Dream Intro.