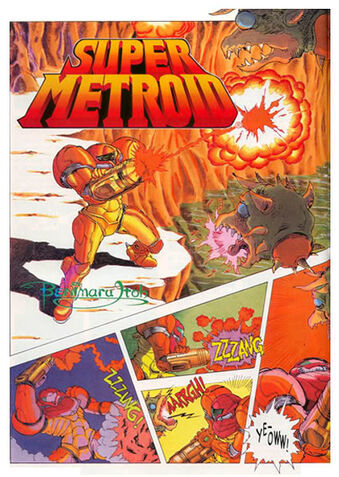 Super Metroid Comics is a five-part Comic-Book Adaptation of the third game in the Metroid series, Super Metroid, and was released in issues 57 - 61 of Nintendo Power in the mid-90s. It features an adapted version of the game's storyline that delves into Samus Aran's history as a bounty hunter, and introduces a number of new characters to the game universe. Interestingly, the first two issues managed to predate the video game's release, serving as a prologue of sorts for fans at the time.

The story begins with Samus waking up from a nightmare and going about her routine patrol of Federation space, only to discover a distress call emanating from the Space Colony. Upon arriving, she discovers that one of her enemies, Ridley, has massacred the scientists and stolen the Metroid hatchling she previously rescued, and is forced to flee with another bounty hunter, Armstrong Houston, after failing to stop the colony's self-destruct sequence.

From there, the comic diverges greatly from the game. Samus and Houston rendezvous at Federation headquarters and meet with Galactic Federation Chairman Keaton and Chief Officer Hardy to report that the Space Pirates have emerged once again, then head off for Zebes to combat the threat directly. However, soon after arriving, Samus' suit is compromised and she is taken by Houston to see Old Bird, one of the last known member of the Chozo species. Samus heals herself up so she can take out the Space Pirate base for good, but Mother Brain has returned and is trying to convert the captured Metroid to her cause...

The comic featured a number of Canon Immigrant characters who would later show up in the Japan-only Metroid manga, including Keaton, Hardy and Old Bird, as well as plenty of Totally Radical dialogue. The series has not been reprinted since its original run.

The comic can be viewed here

The comic contains examples of the following tropes: