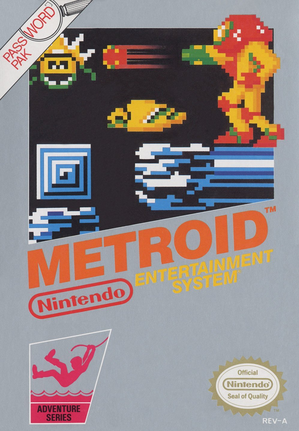 In the year 1980 of the Gregorian Calendar, employees from the nation of Japan advanced a company known as Nintendo, and an age of prosperity began. A successful exchange of consumers and developers resulted, and thousands of video games shuttled back and forth between nations. Soon, however, The Great Video Game Crash of 1983 began to attack the industry, threatening galactic peace. Nintendo struck back against this aggression, but the Crash's attacks were powerful and it was impossible to withstand it in the vast reaches of the West. So Nintendo called together mighty video game franchises to battle the stagnant market.

In the year 1986 of the Gregorian Calendar, the company decided on a risky strategy: to send a lone space hunter game to penetrate the Crash's stronghold and destroy the mechanical life-form that controlled its defenses. The space hunter game chosen for this mission was Metroid. Considered the greatest of all early shooter-adventures, Metroid successfully completed numerous missions that others had thought impossible. Despite its accomplishments, much of its hero's identity, Samus Aran, remained a mystery... unless the player beat the game in under three hours, upon which they discovered that Samus Is a Girl.

Metroid successfully sold millions of units and established dozens of mechanics now standard for subsequent video games, such as secret endings, back tracking, discoverable power-ups, and sequence breaking. Its own legacy was continued by a budding franchise of Metroid sequels that told the rest of the saga of Samus, and by its remake, Metroid: Zero Mission, which came out in the year 2004 of the Gregorian Calendar. In Zero Mission, Samus retells the story of her first adventure to a new generation, and includes a few twists in the story for her veteran fans.

Metroid has also seen a number of adaptations, including a Wanpakku Comics manga that doubles as a strategy guide, and the Choose Your Own Adventure gamebook Metroid: Zebes Shin'nyuu Shirei. The gamebook notably features some Adaptation Expansion that would later be revisited in the official remake, Zero Mission.

Compare to Kid Icarus (which was built on the same game engine as Metroid and shared the same dev team) and The Legend of Zelda I (which was a major influence on the non-linear design of Metroid).