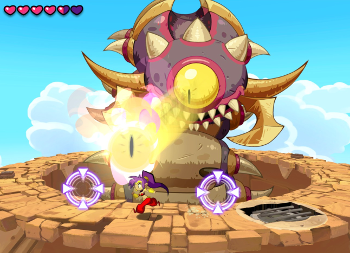 Occasionally, developers will create a boss fight in which the boss is so massive that there is no way for it to move around. Rule of Cool only helps so much.

They solve this problem by sticking it in the middle of the arena. The player character will have to run about the arena while the enormous boss will pivot to face the character, and occasionally attack. Common attacks for the boss include at least one way for it to reduce the player's running room. A Sub-Trope of Stationary Boss.

Not to be confused with Climax Boss, who's pivotal to the plot.