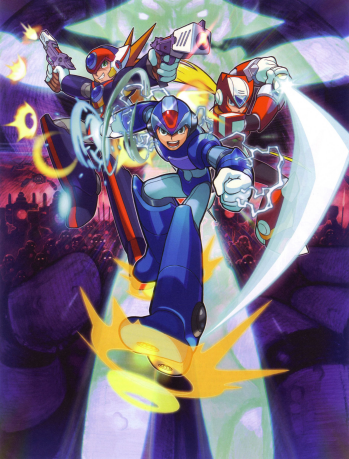 "That's right. The Orbital Elevator is under our control now...It begins now, X. A new world will be born!"
— Vile
Advertisement:

Mega Man X8 is the eighth and final game (so far) in the Mega Man X series released in North America for the PlayStation 2 on December 7, 2004. It was later released in Japan, Europe, South Korea in the following year along with a port on Windows PC.

It is late 21XX. A new generation of Reploids, set apart by their DNA Copy Chips that allow them to freely change their forms and nullify any viral infections, has entered production (Axl is revealed to be a prototype of these Reploids). Meanwhile, the humans have decided to colonize the Moon in order to escape the never-ending chaos of the Maverick Wars. This operation, dubbed the "Jakob Project," has resulted in the construction of an orbital elevator to help transport workers and materials into space. Many new generation Reploids, such as the project's director Lumine, have been created to aid.

However, Lumine is suddenly kidnapped by the Maverick Hunters' old enemy Vile, and a worldwide Maverick riot breaks out among the new generation Reploids. The Jakob Project has been hijacked for reasons unknown. Now it's up to X, Zero, and Axl to stop the Mavericks once again and rescue Lumine.

As you may have guessed by now, the gameplay of X8 is very much like its predecessors as players complete a series of stages and defeat the bosses to earn their special weapon. In addition to gaining special weapons from bosses, players can develop upgrades for the heroes with Metals scattered through the stages and dropped by slain enemies. Just like Mega Man X7, players bring a duo of Maverick Hunters into each stage; however, this time, all three playable characters are available from the get-go, each with their own distinct gameplay style. Despite this game's use of 3D visuals, the developers ditched the 3D free-roaming gameplay of X7 after being harshly criticized by critics and fans alike and went with a 2.5D approach akin to the previous games in the series.

The Mavericks of Mega Man X8 are: