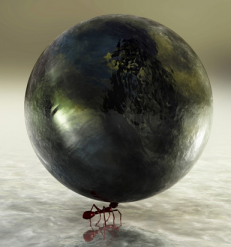 Got the whole world in my jaws!
Vi: It must be rough picking up berries all day...
Leif: Ants are extremely strong, are we right?
Kabbu: Indeed. Objects even I would find heavy are quite manageable for them.
Leif: Then, this job must be like child's play to them.
Vi: This went from worst job to best job pretty quick...If you're an ant, at least.
— Bug Fables
Advertisement:

Ants are able to carry several times their own body weight. In fiction, especially in cartoons, this is exaggerated for fun, making them able to carry a whole pie/banana/chicken/watermelon/whatever. Often, they'll steal some picnickers' food.

Ants are usually the only species to get this distinction, despite most small insects having similarly high relative lifting ability. In the most extreme cases, humans shrunk to ant size will recruit ants to do heavy lifting despite humans actually being better built for lifting proportional to their size.

When Lindsay doesn't walk down the aisle, Tchotchke summons ants to move the shoe and keep Shel from being disappointed.

When Lindsay doesn't walk down the aisle, Tchotchke summons ants to move the shoe and keep Shel from being disappointed.