Comic Strip / The Far Side 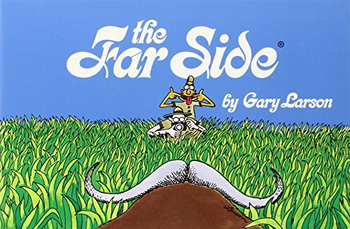 This is just some of the hilarious stuff you’re gonna see.
Classic single-panel Newspaper Comic by Gary Larson. Running from January 1, 1980 to January 1, 1995, it featured numerous talking animals, most notably cows, and frequent depictions of heaven and hell, along with various other stock settings.
Advertisement:

The strip was also known for its use of scientific jokes and puns. A story Mr. Larson quotes in one of his anthologies tells of a science teacher who had Far Side cartoons mounted on a bulletin board. As his students learned more and more, they laughed at more and more of the jokes. This is pretty much the essence of The Far Side — witty, educated, nerdy humor that dealt with the world of animals and plants far more so than the mundane reality of cities and towns.

As a result of The Far Side's popularity, two species of animals have been named after Mr. Larson — an owl louse (Strigiphilus garylarsoni

), and an Ecuadorian butterfly (Serratoterga larsoni), which Larson humorously admitted was the best someone like him was ever going to get. In addition, the distinctive tail spikes of Stegosaurs are called thagomizers

in reference to one of his cartoons. An animated special, Gary Larson’s Tales from the Far Side, was also released in 1994.

Attention: Due to our policies regarding copyright law, the vast majority of Far Side strips cannot be used for page images. Also, Mr. Larson has requested that his work not be displayed online.

In late 2019, Larson launched an official Far Side Internet site

, which reposts batches of old strips, and even includes some all-new material

— So I’m hopeful this official website will help temper the impulses of the infringement-inclined. Please, whoever you are, taketh down my cartoons and let this website become your place to stop by for a smile, a laugh, or a good ol’ fashioned recoiling. And I won’t have to release the Krakencow. — means that the aforementioned rules are still in effect. In 2020, he's begun to publish new strips.

The Far Side has named the following tropes:

"Tropes of The Far Side":

Murray eventually took the job - but his friends never did speak to him again.