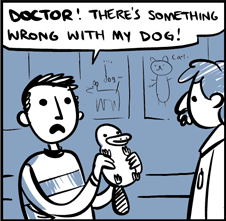 How many dogs have duck bills?
"So please — before you think about hurting someone over this trifle of a film, remember: even God has a sense of humor. Just look at the Platypus. Thank you and enjoy the show. P.S. We sincerely apologize to all Platypus enthusiasts out there who are offended by that thoughtless comment about the Platypi. We at View Askew respect the noble Platypus, and it is not our intention to slight these stupid creatures in any way. Thank you again and enjoy the show."
— Dogma Opening Disclaimer
Advertisement:

When descriptions and specimens of the Duck-Billed Platypus were first sent to Europe by British colonial officials in Australia, the first reaction of many scientists was to brush it off as an elaborate hoax, like a monkey and fish sewn together as proof of mermaids. They had their reasons, too — to a taxonomist not accustomed to its reality, the unique features of the platypus must make it appear like a strange mix of mammal, reptile and bird: They are classified as mammals, but they have snouts resembling duck bills,note As adults, they even lose their teeth and replace them with keratinous structures superficially resembling the ridges (lamellae) found inside ducks' bills. they have dense fur but the males also have spurs on their legs laced with venom, their young hatch from eggs, and they feed their young by sweating milk.

(And these aren't even the weirdest things about it: platypusesnote or is it "platypi"... or "platypodes"... also sense electrical fields like a shark, have legs splayed to the sides in a reptilian manner, have no stomach, secrete their own antibiotics, have ten sex chromosomes instead of two, have a reproductive system akin to a bird with only one functional ovary, and even glow in the dark under UV light, as discovered in 2020 research.)

While the verifiable existence of the duck-billed platypus is nowadays public knowledge, fiction still likes to lampshade how much of a living turducken they are compared to the rest of the Animal Kingdom. So when a character is told about the existence of platypuses, they will usually scoff at the idea. When they discover that the platypus is very much real and not some taxidermic prank or mythical creature, they throw their hands in the air and resign themselves to the fact that since platypuses exist, then so do fairies, mermaids and the crocoduck.

It's worth noting that many of the odder traits of the platypus were once common among mammals. It's simply that the dominant group of mammals alive today, the therians (placentals + marsupials), lost most of the wackier characteristics like egg-laying and venomous spurs. As with all organisms, the platypus can be said to be only weird in context.

The archetypical Real Life example of a Mix-and-Match Critter.