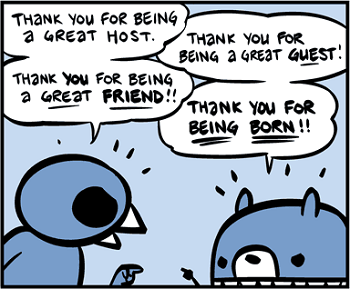 This trope describes the situation when Alice and Bob are having an argument and each one decides to be "the better person" by backing down and letting the other win. Then they start arguing again about who will be allowed to give in.

The humor, of course, is that Bob and Alice are being childish and petty in the same moment that they think they're proving their maturity.

When this happens expect lots of Passive Aggressive Combat. May also involve a Gift of the Magi Plot if the two characters are arguing over who should get the other their gift. Compare with the Abilene Paradox, where characters try to let the other have their way, and wind up choosing something that neither side wants. It can also take the form of dueling Compliment Fishing ("No, you're really good, much better than me!"). Compare More Hero than Thou, Overly Polite Pals, Politeness Judo. Sister Trope to Misery Poker.