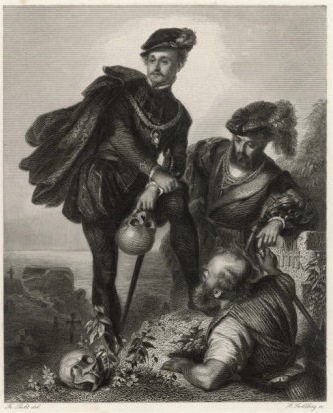 Alas, Poor Yorick.
"To be or not to be... that is the question."
Advertisement:

The Tragedy of Hamlet, Prince of Denmark, often shortened to Hamlet, is one of Shakespeare's best known plays and certainly his most over-analyzed. It is one of the most influential works of literature ever written.

Hamlet is the Prince of Denmark, whose uncle Claudius has ascended the throne after Hamlet's own father mysteriously passed away. Hamlet receives evidence that Claudius murdered the late king to seize power, and is commanded to exact Revenge, choosing to cover his behavior by faking insanity. As the play progresses, however, it becomes obvious that Hamlet is highly reluctant to follow through with the murder... and ambiguous as to how much of his madness is actually fake. Complicating matters are a number of other characters: Ophelia, the sometime object of Hamlet's affections; Polonius, Ophelia's father and Claudius's meddling royal chancellor; Gertrude, Hamlet's mother who has now married her brother-in-law; Rosencrantz and Guildenstern, Hamlet's college buddies now conscripted to spy on him; and Claudius himself, who is well aware that Hamlet is Denmark's rightful heirnote Typical rules of primogeniture say that the king's son takes the throne after him, even if the king has a brother and has started scheming to remove him from the picture.

Shakespeare did not invent the story of Hamlet's quest to bring the murderer of his father to justice. The earliest surviving "record" is in the twelfth-century Gesta Danorum ("Deeds of the Danes"), by Saxo Grammaticus, wherein Hamlet—or Amleth (Amlóði), as he's called in that version—is shown as a legendary figure who succeeds in destroying his uncle and becoming king, only to die in a later battle. The story was abbreviated and amended numerous times and had been presented as a play in English more than once when Shakespeare decided to tackle the story. By that time it had been changed almost beyond recognition—Hamlet's mother, who had originally been forced to marry her brother-in-law, was now an accessory to his usurpation of the throne, while Hamlet had been turned into a Christian and aged a number of years.

But it is hardly the plot that has enraptured the play's generations of admirers. Hamlet devotees are generally drawn to either the language—which is vibrant even by Shakespearean standards—with its manifold layers of meaning and the staggering number of alternate readings it can support, or to the character of Hamlet himself, who often seems simply too big for the play he inhabits. The infinite interpretations, motivations, and traits readers and critics have ascribed to Hamlet is a testament to his universality as a character, and it is this universality, far more than any deconstructed revenge plot, that has captivated audiences for four hundred years.

It’s also been speculated since the 18th century what role the death of Shakespeare’s son, Hamnet, of unknown causes two to five years previously had on the development of the play. Shakespeare was primarily writing comedies at the time of Hamnet’s death before suddenly switching gears to his darkest work. The names Hamlet and Hamnet were considered virtually interchangeable at the time, although some would argue that it’s a coincidence because the name comes from the aforementioned Amleth. The original Danish folk tale also has a happy ending. So little is known about his family that it’s impossible to know definitively but much academic work is still devoted to it.

Even more than is usual for Shakespeare, Hamlet is filled with expressions that have become clichés; examples include "Hoist by His Own Petard," "The lady doth protest too much," "Frailty, thy name is woman," and "The play's the thing." Oh, and something about whether or not to be that was really difficult to translate into Klingon. And that's not to mention many subtler neologisms that have wormed their way into everyday English.

Since Hamlet is almost always performed with cuts (as Shakespeare's longest play, performing the whole thing usually takes almost four hours), arguably every production is an adaptation, some even switching out scenes for pacing purposes (like the 2010 version did as explained here

) Sometimes the basic idea is what's adapted, more or less faithfully, and little or none of the original language is used.

open/close all folders
Notable productions
Notable adaptations
Characterization tropes are mostly located on the Characters sheet.NOTE: All spoilers will be unmarked. This play is over 400 years old at this point and is available for free just about everywhere.

Tropes Appearing in "The Mousetrap"

"And the rest... is silence."
Feedback