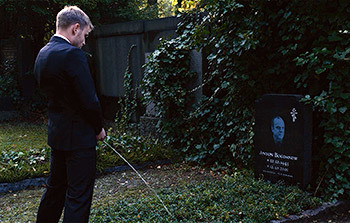 When you gotta go, you gotta go.
"Owlson, help me up onto his casket so I can dance on it!"
— Flintheart Glomgold, DuckTales (2017)
Advertisement:

A funeral is a service that allows a deceased's family and friends to congregate in one place to celebrate the deceased's life and pay their respects. To do so is considered common courtesy and practice. So what do some people do once the family is assembled?

How about doing the exact opposite of that by behaving in extremely tactless and inappropriate ways that would have the deceased rolling in their coffins if they knew?

Sometimes this disrespect comes in the form of discussions that are brought up around or even at the time the proceedings begin. Perhaps the deceased is an adult involved in one of the ends of an inheritance dispute. Maybe the deceased was survived by an illegitimate child or, even worse, a child that none of the relatives are completely willing to take custody of. In any event, the attendees of the funeral will be all too eager to talk about those matters than to mourn, not realizing that talking about them is putting their selfishness and spite out in the open.

For a villainous character, it can be a form of cowardice because they're using a corpse to show off. It shows them as lacking empathy towards the mourners and they are only doing it because a corpse can't fight back or dispute their claims. If the dead person was a villain in life, then it shows how much power they had over their victim since the victim only felt safe coming out in public when they were absolutely sure the person was dead and buried.

Other times, disrespect or lack of concern toward the matter at hand show in their actions. After all, attending the funeral in improper dress or fooling around with whatever device is in possession instead of paying attention to the pastor or the procession are a few of the best ways to show love and care to the dead.

And that's not touching on those who are much more direct about their scorn toward the deceased. If the deceased was a Jerkass or guilty of other negative qualities in life, then expect people to open up and gossip about their faults or spit on his coffin now that the deceased is no longer around to complain. Sometimes, the deceased's family won't even wait to express their views until the funeral, as they will expose him/her in the obituary as a bad person

Many times, criminals who are guilty of (especially) the most heinous of acts will have private funerals, if they have one at all; that is, the funeral is open only to those explicitly invited, and often the funeral location will not be announced publicly. Other times, the obituary will run only after the funeral service and burial. This is to keep unwanted intruders from interrupting the service – for instance the embittered victim who was personally (or had a close friend or family member) particularly harmed by said deceased criminal's actions from showing up and — in the process of screaming about how the decedent ruined his/her/others' lives — disrupting the service and disrespecting the religious traditions of a funeral. After all, even the most heinous (now-deceased) criminal still likely has family and/or friends who wish to, in the very least, mourn that person in peace and remember him/her how they wish to. In these cases, usually there will be an usher or a police officer standing by the door of the funeral location to stop anyone who does happen to show up uninvited.

Funeral scenes like these also come up — particularly in fiction — to show how the people the deceased thought they were close to truly care once they are gone. Either they never truly did or they only cared to a shallow degree; or the funeral is a way to release pent-up frustration, hate, contempt and so forth toward the decedent, emotions that were held in for whatever reason while that person was still living. Other times, these scenes show what Jerkasses the family and "friends" can be in general once the deceased is no longer around to remind them when to filter out their open contempt toward the deceased, his family, and/or his life decisions.

In the worse case scenario however, the funeral becomes the site of a bloodbath, where a rival family or embittered enemy comes armed and takes grieving members of their loved ones with them to the afterlife seeing that the death of just one person does not suffice and the rest of them can join them in death. More often then not there are additional bodies to bury in the wake of the massacre.

There are sometimes people who don't even have to misbehave. If you're attending a funeral for a free meal and other things for your own self-interest, then the dead would have every right to be pissed off at you.

The deceased isn't out of danger even after the funeral is over. After that, bitter peers can pay their disrespects by vandalizing, desecrating, or even destroying the grave. An Excrement Statement is often in play here, especially in more light-hearted (if disgusting) works.

This should not be confused with its Sister Trope, The "Fun" in "Funeral" (though overlap is possible). The latter involves wacky situations in a funeral played for humor that occur out of the characters' control or because of their idiocy, while this trope specifically involves rude, uncaring, spiteful, contemptuous, hateful or simply Jerkass behavior and statements about the deceased and/or his family made during what is supposed to be a solemn event. This can be done for either drama or comedy.

Compare and contrast Cheerful Funeral, where people act in a light-hearted and cheerful manner at a funeral of someone they loved, to celebrate their life and the joy they brought when they were alive.

This may also overlap with And There Was Much Rejoicing, depending on the context. See also Dishonored Dead, where the rites themselves are disrespectful or nonexistent.

As a Death Trope, this trope is Spoilered Rotten by nature, and many examples here will spoil a work unless the funeral is part of someone's backstory. Unmarked spoilers below.