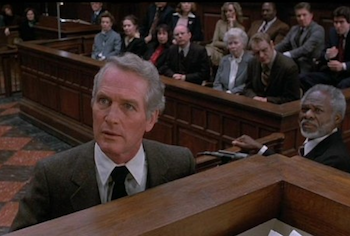 "Your Honor, if you're going to insist on presenting my case for me, I respectfully request that you don't try to lose it."
— Frank Galvin to Judge Hoyle.
Advertisement:

The Verdict is a 1982 courtroom drama film directed by Sidney Lumet, written by David Mamet (based on the novel of the same name by Barry Reed) and starring Paul Newman.

Frank Galvin (Newman) is a washed-up, alcoholic Boston attorney who hasn't won a case in years and trolls for clients at funerals. His friend and mentor, Mickey Morrissey (Jack Warden), gets him a medical malpractice suit about a woman rendered comatose during surgery with a guaranteed large settlement that will let her family put her in a nursing home.

However, a visit to the girl deeply affects him, and at the meeting with the Archdiocese of Boston to hammer out the settlement, he rejects the money, deciding that this is his last chance to save himself and resolving to fight it out. This, of course, displeases everyone, from the woman's family to Judge Hoyle (Milo O'Shea), who's presiding over the trial. Opposing Galvin for the defense is celebrity attorney Ed Concannon (James Mason), backed by a large and professional legal team.

To make matters worse, no one seems to be able to tell him what actually happened during the surgery. Also along the way he finds a lover in a woman named Laura (Charlotte Rampling), a complex relationship that isn't made any easier by the trial.

The film was nominated for five Academy Awards, including Best Picture, Best Actor, Best Supporting Actor, Best Director, and Best Screenplay, though in the end it lost in all categories.

Both Tobin Bell and Bruce Willis can be seen as courtroom spectators in the climactic court scenes.