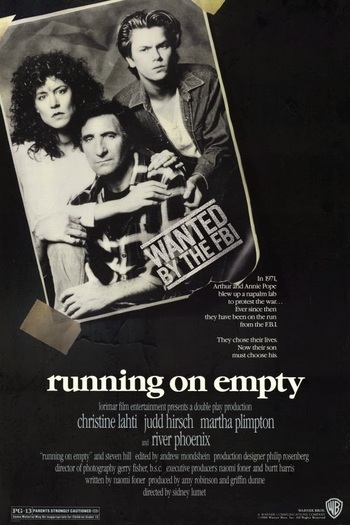 "Why do you have to carry the burden of someone else's life?"
— Lorna
Advertisement:

A 1988 drama film directed by Sidney Lumet, dealing with the difficult family life of the Popes, who've been running from the FBI for many years because parents Arthur (Judd Hirsch) and Annie (Christine Lahti) blew up a napalm lab in a protest against The Vietnam War. Together with their sons Danny (River Phoenix), now 17, and Harry they keep moving from place to place, assuming new identities every time in order to keep the authorities off their heels.

Loyalities are finally put to the test when Danny meets a dedicated teacher at his new school who wants to help him get into Juillard, where Danny can make some use of his gift for piano playing. Danny falls in love with the teacher's daughter, Lorna (Martha Plimpton), who makes him question his life and the relationship with his parents for the first time. In the end, he has to decide between his family and his future.

No relation to the album and song of the same title by Jackson Browne, outside of its providing inspiration for the movie's title.