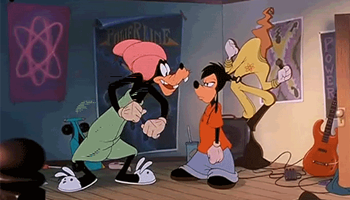 A pair that consists of a silly, carefree or simply lighthearted parent and a child who is down to earth, snarky, brooding or all three. Usually parent and child will be of the same gender (so a wacky father with a brooding son or a ditzy mother with a serious daughter). In addition, the parent will often be utterly embarrassing (sometimes only to the child, though). Expect Awkward Father-Son Bonding Activity to pop out, which will usually end with an Aw, Look! They Really Do Love Each Other moment. Can sometimes be played for drama and show how utterly messed up it is when the younger person has to be the more mature one.

Subtrope to Like Father, Unlike Son. Compare Childish Older Sibling. Undoubtedly Truth in Television. You might have Wacky Parents yourself or Serious Children of your own.