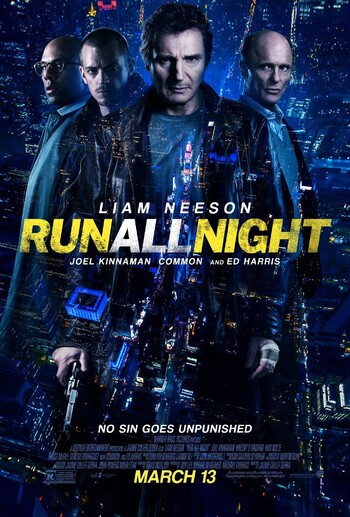 "Wherever we're going, when we cross that line... we're going together."
"Right now, we're the most wanted men in this city. Michael, listen to me. One night. That's all I'm asking. Listen to your father for one night. If I can't figure this out by the morning... I'll walk myself into the precinct and tell them I blew those two officers away. One night. Then you never have to see me again."
— Jimmy Conlon
Advertisement:

Run All Night is a 2015 action film starring Liam Neeson, Joel Kinnaman, Common, and Ed Harris. The movie is about a former hitman named Jimmy Conlon who ends up acquiring the wrath of his old boss and closest friend Shawn Maguire after he was forced to kill Shawn's son Danny in self-defense when he was about to kill Mike, Jimmy's son. Now, the two must spend the night on the run in New York City and Jimmy has to protect his son at all costs.

Run All Night contains examples of: