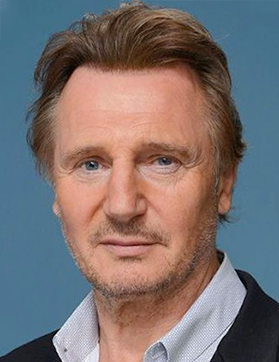 Lewis: No, now I'm curious. Let's say you're going to prison for a long time. Plus, your parents? Very understanding. Who's your cellmate?
Oswald: ...Liam Neeson.
— The Drew Carey Show, first episode
Advertisement:

His long and multi-faceted career started out with character actor work in films like Excalibur, The Bounty (as a mutinous sailor) and The Dead Pool. He graduated to leading man status with comic book horror adaptation Darkman. His later career has taken him from serious drama (as Oskar Schindler in Schindler's List and Dr. Jerome Lovell in Nell) to fantasy (Zeus in Clash of the Titans and the voice of Aslan in The Chronicles of Narnia) to action (Bryan Mills in Taken) to Sci-Fi (Qui-Gon Jinn in Star Wars Episode I: The Phantom Menace), to historical film (Rob Roy, Michael Collins). Animated characters that Neeson voiced include Fujimoto, the dad of the eponymous character in Ponyo, and Bad Cop/Good Cop, in The LEGO Movie, and The Monster in A Monster Calls. Also said to have been the inspiration behind Captain Carrot of Discworld fame. In recent years, Neeson seems to have replaced the late Sean Connery as Hollywood's go-to-actor for playing The Mentor and the Cool Old Guy.

Following his shift to bona fide action star with the Taken series, his roles have included The Narrator in Jeff Wayne's Musical Version of The War of the Worlds, Good Cop/Bad Cop in The LEGO Movie, Air Marshal Bill Marks in Non-Stop, Clinch in the Seth MacFarlane comedy A Million Ways to Die in the West, and Matthew Scudder in A Walk Among the Tombstones. He also did the voice of James from Fallout 3.

Neeson was married to Natasha Richardson between 1994 and 2009, when she died in a tragic skiing accident. They had two sons.

"I don't know who you are. I don't know what you want. If you are looking for ransom, I can tell you I don't have money. What I do have are a very particular set of skills; skills I have acquired over a very long career. Skills that make me a nightmare for people like you. If you let my daughter go now, that'll be the end of it. I will not look for you, I will not pursue you. But if you don't, I will look for you, I will find you, and I will kill you."